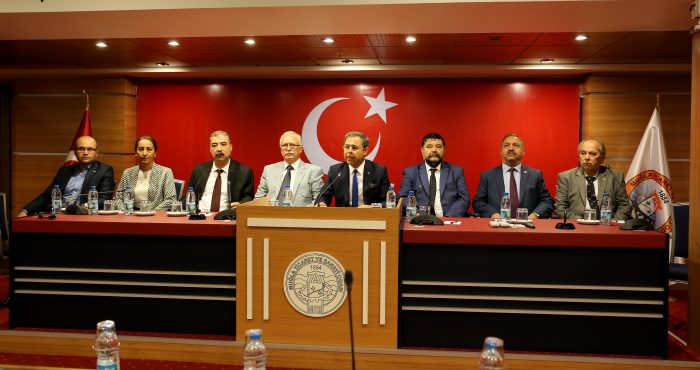 Muğla Chamber of Commerce and Industry Chamber (MUTSO) , Muğla Commodity Exchange, Bodrum Chamber of Commerce, Marmaris Chamber of Commerce, Chamber of Agriculture, Mugla Tradesmen and Artisans Chambers Union, KAMU-SEN MEMUR-SEN, HAK-İŞ and TİSK all over simultaneous with Turkey , within the scope of the Operation of Peace Spring found a joint press release.
In a statement hosted by MUTSO and chairman of MUTSO Mustafa Ercan, Muğla Commodity Exchange President Hurşit Öztürk, Bodrum Chamber of Commerce President Mahmut Serdar Kocadon, Marmaris Chamber of Commerce President Mutlu Ayhan, Agriculture Chamber President Mehmet Baştuğ, Muğla Union of Chambers of Craftsmen and Artisans Şükrü Ayyıldız, PUBLIC-SEN President Mürsel Özata, MEMOR-SEN President Adem Köseoğlu, HAK-İŞ President Esin Dinç, TİSK Provincial Representative instead of Mehmet İskender was present Hasan Yavuz by proxy.
The explanation is as follows:
“We are here today as Muğla Chamber of Commerce and Industry, Muğla Commodity Exchange, Bodrum Chamber of Commerce, Marmaris Chamber of Commerce, Chamber of Agriculture, Muğla Chamber of Tradesmen and Craftsmen, KAMU-SEN, MEMUR-SEN, HAK-İŞ and TİSK. By making this statement together with all the Chambers and Commodity Exchanges in 81 provinces at the same time, to both our country opinion and the world public opinion call out to you.
Turkey, on 9 October 2019 on the Syrian border name of “Peace Spring” has launched the cross-border operation. The aim is to ensure the security of the borders of our country and to eliminate the terror corridor which constitutes a threat to our country and the countries of the region. This is to clear the region from terrorist organizations such as PKK / PYD / YPG and DAESH, to save the Syrian people from the compulsion and oppression of the terrorists and to restore peace, security and peace in the region. We are behind and support this decision of our state. Because Turkey has used its rights arising from international rules. Operation Peace Spring was initiated within the framework of universal law and United Nations Security Council anti-terrorism decisions and the right to self-defense in the UN Convention. The territorial integrity, sovereignty and political unity of Syria are respected. Therefore, this operation was legitimate and in accordance with international law.
Our country has been subjected to more than a hundred harassment and hostile actions in the last two years, especially by the elements of the terrorist organization located across the border in the east of the Euphrates. These terrorist organizations also hold attacks on Syria and against Syrians. Complaints and reactions of the local people in Syria against the increasing human rights violations, forced migration, harassment and persecution of terrorist organizations are constantly increasing. Everyone should now see that very well; we cannot be expected to remain silent to terrorist groups that kill innocent people and pose an open threat to the security of our country. Fırat Shield and Olive Branch Operation to start and with in Turkey all these ongoing operations , the terrorist organizations and their supporters served a reply in the most powerful way. At the same time, utmost attention is paid to the protection of civilians and innocents. We have already shown this in both Euphrates Shield and Olive Branch operations. Beforehand, Life has returned to normal in the region where terror prevailed, peace and tranquility came. We also prepared the ground for the return of the Syrians who had to leave their homeland.


Turkey’s counterterrorism-oriented efforts, including ethnic and religious cleansing, the PKK criminal nature of crimes against humanity / PYD / YPG and pave the way for the return of Syrians have been displaced due to Dease actions, Syria’s territorial integrity and unity will contribute . Therefore, every operation launched by Turkey, Syrian immigrants, oppressed and disadvantaged are supported by local people. In the light of all these facts, we invite the international community to support our country by expressing its intention to show common stance against terrorism and to make universal human rights dominant in this region.

Finally, we want everyone to know that. Turkey and the Turkish nation to the threat posed to Turkey’s economy, business and civil society, with the most beautiful and will give you an answer. each individual of this country in the face of these threats, much more for the future of Turkey will work, will produce more. Our top institutions have started to work with their counterparts abroad and the international organizations they are members of and to convey this rightful position of our country. It is not a day of silence, but of the voice of national unity, one and together. On the other hand, we urge all citizens to be wary of information pollution and provocations, especially on social media. Our neighborhood is our neighbor, brother