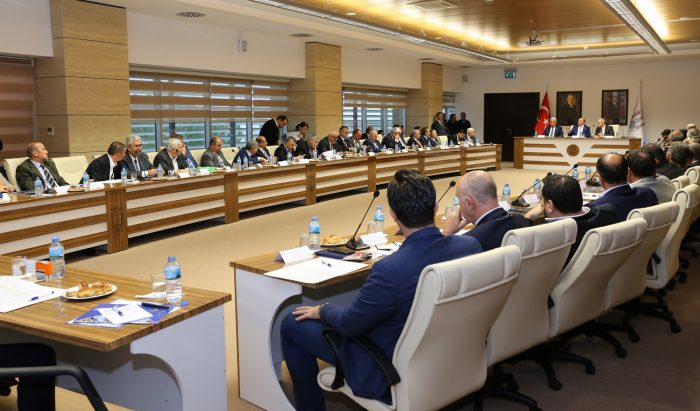 Muğla’da Teknopark has been working for a long time. was established. Teknopark A.Ş. with 52 partners After the signatures in the presence of the notary, the passion passed. MUTSO President Bülent Karakuş became Vice Chairman of the Board of Directors in this formation which will be the first in terms of unity and cooperation provided both in terms of structure and in Muğla.

Muğla Sıtkı Koçman University (MSCÜ) has been working for a long time in the leadership of TEKNOPARK A.Ş. It was established on 29 November 2016 with a meeting held before the notary public. At the meeting held with the participation of all administrative organizations, non-governmental organizations and sector representatives of Muğla in the Rector’s office, Teknopark A.Ş. The signatures of the 52 founding members passed on. With the foundation of Teknokent AS, the Chairman of the Board of Governor Amir Cicek, while the President of the CEC. Dr. Mansur Harmandar and the Chairman of the Board of Muğla Chamber of Commerce and Industry (MUTSO) Bülent Karakuş, Vice President.

Speaking at the opening of the meeting, Governor Amir Çiçek said: “Up to now, our project had to pass through a myth and start building our building. However, we have deliberately delayed the Technopark in order to avoid a shadow to my project during the period after July 15th. In the next period we want to start our construction as soon as possible, work with our bureaucrats. I believe there will be a great deal of energy coming out of this synergy. ”

After the Governor Amir Cicek, Rector Prof. Dr. Mansur Harmandar stated that they are working for a thematic technopark in order to capture new technologies in production, to create employment and to transport our city to a competitive level economically, said: “We will open up the front of all entrepreneurial companies with Technopark. It covers the renewable energy, health, agricultural activities, animal husbandry and software / information fields of Thematic Technopark. Our company will continue its activity according to commercial law. Good luck. ”

Mugla Metropolitan Municipality Mayor Osman Gürün said, “We are here to sign a contract at the end of a certain period. The landscape here is a structure established with a common will on the initiative of our University. Technoparks are structures that develop themselves after slowly advancing. Moreover, the gathering of such a wide representation and the signing of the signatures is a first in Muğla. I would like to thank all of you, especially Mr. Valim and the Rector. ”

Following the opening speeches, a presentation was made on the details of Teknopark and the founding members were informed.

Founding members signing the project while signing the statement MUTSO Chairman Bülent Karakuş said: “This investment is an important and necessary investment for Muğla. The year 2016 was not very efficient for our country and our region. These effects will continue and I think 2017 will not be very well. However, world machinery is devrine. As Muğla, we are not in a very good place in the industry. We will evaluate this with Technopark. I think it will be more demanding than other technoparks because of our geographical location and social facilities. By examining the successful examples in the world, we can pass them on in Mugla. Appropriation is important. It is very important to be together for success. I thank everyone who contributed. “