Bodrum (Turkish pronunciation: [ˈbodɾum]) is a district and a port city in Muğla Province, in the southwestern Aegean Region of Turkey. It is located on the southern coast of Bodrum Peninsula, at a point that checks the entry into the Gulf of Gökova, and is also the center of the eponymous district. The city was called Halicarnassus of Caria in ancient times and was famous for housing the Mausoleum of Mausolus, one of the Seven Wonders of the Ancient World. Bodrum Castle, built by the Knights Hospitaller in the 15th century, overlooks the harbour and the marina. The castle grounds include a Museum of Underwater Archaeology and hosts several cultural festivals throughout the year. The city had a population of 36,317 in 2012.

Bodrum has a hot-summer Mediterranean climate (Csa in the Koeppen climate classification). Winter average is around 15 °C (59 °F) and in the summer 34 °C (93 °F), with very sunny spells. Summers are hot and mostly sunny and winters are mild and humid. 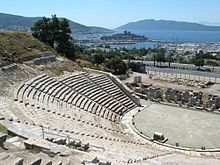 Theatre of Halicarnassus in Bodrum, with the Bodrum Castle seen in the background.

Halicarnassus (Ancient Greek: Ἁλικαρνᾱσσός Halikarnassós or Ἀλικαρνασσός Alikarnassós; Turkish: Halikarnas) was an ancient Greekcity at the site of modern Bodrum in Turkey. Halicarnassus was founded by Dorian Greeks, and the figures on its coins, such as the head of Medusa, Athena or Poseidon, or the trident, support the statement that the mother cities were Troezen and Argos.[5] The inhabitants appear to have accepted Anthes, a son of Poseidon, as their legendary founder, as mentioned by Strabo, and were proud of the title of Antheadae. The Carian name for Halicarnassus has been tentatively identified with Alosδkarnosδ in inscriptions.

At an early period Halicarnassus was a member of the Doric Hexapolis, which included Kos, Cnidus, Lindos, Kameiros and Ialysus; but it was expelled from the league when one of its citizens, Agasicles, took home the prize tripod which he had won in the Triopian games, instead of dedicating it according to custom to the Triopian Apollo. In the early 5th century Halicarnassus was under the sway of Artemisia I of Caria (also known as Artemesia of Halicarnassus [6]), who made herself famous as a naval commander at the battle of Salamis. Of Pisindalis, her son and successor, little is known; but Lygdamis, the tyrant of Halicarnussus, who next attained power, is notorious for having put to death the poet Panyasis and causing Herodotus, possibly the best known Halicarnassian, to leave his native city (c. 457 BC).[7]

The city later fell under Persian rule. Under the Persians, it was the capital city of the satrapy of Caria, the region that had since long constituted its hinterland and of which it was the principal port. Its strategic location ensured that the city enjoyed considerable autonomy. Archaeological evidence from the period such as the recently discovered Salmakis (Kaplankalesi) Inscription, now in Bodrum Museum of Underwater Archaeology, attest to the particular pride its inhabitants had developed.[8]

Alexander the Great laid siege to the city after his arrival in Carian lands and, together with his ally, the queen Ada of Caria, captured it after fighting in 334 BCE.

Surviving substructures and ruins of the Mausoleum of Mausolus, one of the Seven Wonders of the Ancient World, in Halicarnassus (modern Bodrum.)

Mausolus ruled Caria from here, nominally on behalf of the Persians and independently in practical terms, for much of his reign from 377 to 353 BC. When he died in 353 BC, Artemisia II of Caria, who was both his sister and his widow, employed the ancient Greek architectsSatyros and Pythis, and the four sculptors Bryaxis, Scopas, Leochares and Timotheus to build a monument, as well as a tomb, for him. The word “mausoleum” derives from the structure of this tomb. It was a temple-like structure decorated with reliefs and statuary on a massive base. Today only the foundations and a few pieces of sculpture remain.

The Castle of St. Peter was built by the Knights Hospitaller.

Crusader Knights arrived in 1402 and used the remains of the Mausoleum as a quarry to build the still impressively standing Bodrum Castle (Castle of Saint Peter), which is a well-preserved example of the late Crusader architecture in the east Mediterranean. The Knights Hospitaller (Knights of St. John) were given permission to build it by the Ottoman sultan Mehmed I, after Tamerlane had destroyed their previous fortress located in İzmir‘s inner bay. The castle and its town became known as Petronium, whence the modern name Bodrum derives.[citation needed]

In 1522, Suleiman the Magnificent conquered the base of the Crusader knights on the island of Rhodes, who then relocated first briefly to Sicily and later permanently to Malta, leaving the Castle of Saint Peter and Bodrum to the Ottoman Empire.

Bodrum was a quiet town of fishermen and sponge divers until the mid-20th century; although, as Mansur points out, the presence of a large community of bilingual Cretan Turks, coupled with the conditions of free trade and access with the islands of the Southern Dodecanese until 1935, made it less provincial.[9] The fact that traditional agriculture was not a very rewarding activity in the rather dry peninsula also prevented the formation of a class of large landowners. Bodrum has no notable history of political or religious extremism either. A first nucleus of intellectuals started to form after the 1950s around the writer Cevat Şakir Kabaağaçlı, who had first come here in exile two decades before and was charmed by the town to the point of adopting the pen name Halikarnas Balıkçısı (‘The Fisherman of Halicarnassus’).[10]

There are no airports in the city. Two airports serve the city. Milas–Bodrum Airport is located 36 kilometres (22 mi) northeast of Bodrum, with both domestic and international flights.[13] Kos Island International Airport, 70 kilometres (43 mi) to the SW, located in Andimachia, Greece, accessible by boats from Bodrum across a 20 kilometres (12 mi) stretch of the Aegean Sea. Aside from year-round flights to Greek destinations, Kos airport’s traffic is seasonal.

There is a main bus stop in the city center with transportation to other locations in Turkey.

The port has ferries to other nearby Turkish and Greek ports and islands.[13]